Looking back on 2015 I realize I was injured from June until the end of the year. As mentioned on a previous blog, I did something horrible to my right hip while training for Hardrock 100 by running up and down Mt. Rainier. Once my right hip was back in place, my left hip was found to have sustained an injury of it's own caused by the compensation and continued training/ racing schedule. 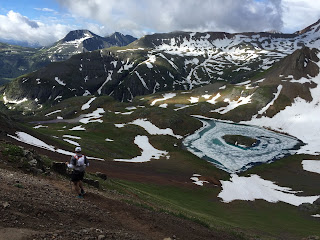 Post Hardrock 100, I recovered a little, then ran the Squamish 50k then the Crystal Mt. Sky Marathon, then the Deception Pass 25k. Each time running on a hip/glute which wasn't quite right but was, very slowly, healing. I kept my training miles fairly low and nursed the injury to a standstill: Very slowly getting better. Along came 2016 and ski race season.
Few people know I ski race in a competitive night skiing league at Snoqualmie Pass an hour East of Seattle. I have been setting courses and racing there for the last 23 years. Race skis, helmet, wax, the whole deal minus the superhero speed suits. The weather in the Cascades makes for some interesting racing which is to say, some nights it rains while other nights it is crystal clear and icy.
The first night of actual racing this year, the course was soft which led to deep ruts. Night skiing makes it so you can not see the bottom of said ruts. As per normal, I bombed as fast as I could into the unknown and was jolted over and over by slamming in and out of the ruts. My back was jarred, my head was all abobble and by the time I took off my gear and drove down the mountain my hip was absolutely... quiet. Not a squeak of pain. I shook it off and waited for morning.
Thursday morning dawned and I went to grimace my way down stairs to make breakfast but, again, nothing. No pain, no grimace. Well G'damn. I may have righted the ship by grounding it again.
Strange thing this body. Tightly wound as I am it looks like what my body needs most to align itself is to be bashed into submission.
2016 is off to a slow start. I ran a 25k fat ass for fun then the Capitol Peak Mega Fat Ass 34 miler to check my conditioning. I was slower than I thought I would be. My lack of training is obvious compared to years past. It was nice to run over 30 miles which I haven't done since last August. The hip is feeling about 90% back and the Orcas Island 50k is next week. After that, adventure awaits. I've some cool things brewing for this year. Merrell, Team 7 Hills, Julbo, Petzl, Drymax, Fuel100 will all be along for the ride.
Posted by adam hewey at 10:46 PM