I was given a shirt from Merrell which says, "Its not the gear, its the adventure." I thought it funny coming from a company which sells gear. Upon further musing, I came to the realization it IS the adventure, the gear is a means of making the adventure more comfortable. Yes, Merrell gear makes me more comfortable on my adventures but the goal is to test the boundaries of our physical and mental capacities. 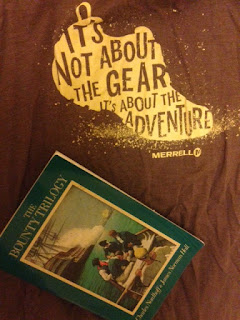 I have been reading a trilogy based on the true stories of the Mutiny On The Bounty. Fascinating tales of the men who endured unthinkable hardship on their journey from Tahiti to Timor, almost 4000 miles of sea in a very small boat. 41 days of bailing water and starving. Adventure of the highest degree.

I read the Bounty book in the back of my mini van by headlamp while parked (illegally) near the start of the Orcas Island 50k. I was there to complete my 8th time racing this NW classic race. I had a bit of a negative attitude as the race has changed so much in the years since I started coming. I was nostalgic for the old days and old friends who used to gather on the ferry to and from the island and camp out the night before on the soggy grass at Camp Moran. The popularity of the Orcas 50k has made it a destination race for new 50k runners who have brought with them a new kind of energy.

Race morning dawned grey as usual. I knew what to expect, what was to come, the first long climb up the paved road. I started with my friend Maxwell Ferguson who claimed to be terribly out of shape and said he'd stick with me (he fast). We worked our way up then down the first climb, finally, Max couldn't stick with me and had to take off after the front pack. I run Orcas the same way every year, slow start, build, kill the climbs, sprint it in and finish between 5th and 10th place. Clockwork. Then, it all changed.

I had just started to feel good at the second aid station around mile 16. I chowed on some PBJ and hit the trail feeling like my legs were finally energized. I was bombing down some fast single track and saw a pink marker on my left down the trail and flew past it but it led to a blown down tree, I danced around the tree and kept going, a while later the trail turned to brush. I looked about for markers and saw nothing. I must have missed a turn. I bush whacked up hill until it led to a little ravine. No trail, no markers. Things were getting interesting. I backtracked and bushwhacked downhill. Another ravine with a trail and pink markers were way down below. I bolted down the steep hillside through the brush and found the trail and markers which read "Timber Harvest" on them. Now I knew I was no longer in a race I was on an adventure. I was excited. This is what I had been yearning for. I'd done the race 7 times. I knew I was on an island, I still had water and food and legs for hours. I thought, "let's see where we end up?" I followed the trail which became an overgrown road which eventually spit out at a cattle farm. I saw a farmer with his dog and horse. I approached them and he said, "Are you doing the long race?" (the Orcas 25k was the weekend prior). I explained I HAD been doing the race and was now on an adventure of my own. He pointed out the dirt road to the main road which would take me back to Camp Moran. I followed the dirt road to the paved road and had to make a guess. Left or Right? I felt like I had come down the mountain on the left so I went that way. About 1.5 miles later the road became a dead end. Oops. Turn around and head back. The farmer said it would be about 5 miles away. I had all day to get back. I met a woman walking her puppy. I continued down the road until it turned sharply at Doe Bay Resort. I'd heard of it but never been there and now here I was unexpectedly.

The most random things can happen when you are open and available for the universe to play with you. I was jogging up the road past Doe Bay and I was passed by a car with a running store sticker on the back window. It stopped a little ways up the road. When I caught up to it, the window rolled down and it was Max Ferguson's girlfriend, crew and puppy. They asked what I was doing, I explained. They offered me a ride to the camp. I would have said no but Max's puppy is a brown husky who is less than a year old. I got to ride in the way back with Greta the pup for the WAY longer than 5 mile trip back to race central. She may have shared one of my peanut butter crackers.

The Orcas 50k debacle was a happy accident. Others got off course too but were more diligent in turning around before it was too late. For me it was a reminder to break new ground. Find new trails, new races. Do something more... I dunno... adventurous. I'm already planning some very long runs for this summer in training for the Fat Dog 120 mile race in Canada in August. I'm also working on a huge trip which is almost ready to be hatched.