One of the major benefits of being an ambassador for Merrell is getting gear to try out and review. I am very hard on gear and tend to work it to the point of breaking before I'm willing to judge it. Here are a few items I'm trying to break.

My love affair with the Merrell All Out Peak trail shoe has been noted, published and I may or may not have a tattoo of it over my heart. The thought of dating it's sister was, well, awkward. I had heard mixed reviews about the All Out Charge, I needed to find out for myself.

On first blush, the shoe looks great. The tread design, though not as burly as the Peak, looks grippy enough for slippery Northwest trails and knobby enough to not wear down. I went to put the shoe on and was confused, the tongue is one sided. At first I thought it was me, then I realized what was going on. A one sided tongue makes for half the slide factor and half as many seams on the top of the foot. Interesting. I think the initial oddity of putting on the shoe leads people to have a negative reaction. This is a shame as it is really a nice ride and a good idea once you get used to it. I had the same reaction to the "Gull Wing" doors of the Lamborghini I sat in so I went with the Volvo instead. 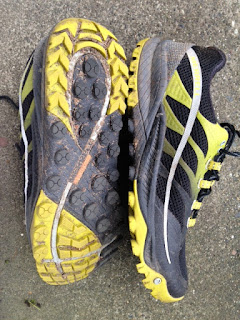 The All Out Charge is a very nice trail shoe. It is light, nimble and has a lot of trail "feel" without losing stability. The tread is really good on slick trails and dry single track. The shoe runs a little narrow but the lacing system allows for a lot of personalized adjustment. I have a wide foot and am able to adjust the shoe to be wider around the forefoot and tighter on the heel. You know a shoe is working for you when you forget all about it during your long runs. I forgot about the Charge until I took it off and knew it worked well for me.

I wouldn't hesitate to recommend the All Out Charge for distances of 5k to 50Mile. They seem stable enough for longer races but I would have to try before I could say.

The only down side of the Merrell All Out Charge is that damn fine sister of hers. The All Out Peak is equally light, equally responsive, equally adjustable but has a tread without compare. I would pick the Charge over Peak on a dry flat course. The rest of the year, the Peaks are the apple of my eye.

I needed a good wind shell for winter running here in the land of rain and darkness. I settled on the Merrell Capra Wind Shell. I liked the look, streamlined, nice color with bright yellow piping to stand out on dark winter nights. Out of the box it looked just as good if not better than in pictures. Light, not crinkly, well constructed. The cool functional design of this wind shell is the windproof fabric in the right places and a lighter, stretchy fabric on the sidewalls and under sleeve. 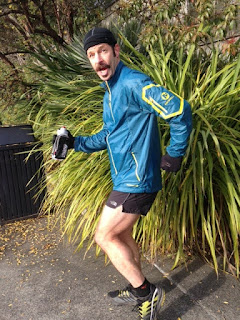 In typical Ultra runner fashion, I took the jacket out to the mountains for a long run which turned from sprinkling rain to downpour to snow to rain. The Capra Wind Shell held up beautifully in all of the conditions. I was surprised at how water repellent it seemed and pleased at how much warmth I was able to save when the rain turned crystalline.

The next week I again took the Capra jacket out for a long run which turned into a five hour drenching in torrential rains. Trails turned to streams, everything I had on was totally soaked. Interestingly, the Capra jacket was wet but again kept me warm. The wind proof fabric worked its magic as an insulating layer and the jacket never got heavy.

Week three was cold. The jacket was warm. The long run turned into an epic bush whack amongst some shin shredding bushes and brambles. About the only good thing on that run was the company, the All Out Charges and the Capra Jacket.

One suggestion for this, and all running jackets. Please, designers, make a zipper which can be successfully open and closed, taken on and off by someone with half frozen fingers. I don't care if it looks really big and silly, I simply want it to work and work fast. Rant over.

The Merrell Capra Wind Jacket is now my go to running shell for Pacific Northwest winter. I may, someday, even try it in the wind.
Posted by adam hewey at 7:58 AM