Giving In not Up- Diez Vista 50k

I was still wet but happy and smiling and driving around North Vancouver with my 16 year old daughter Hazel. Our cheeks were aching from smiling and pink from the cold. First Siri led us to a Tim Horton's in a Hospital, then she took us to one nestled in a 7/11. We were in Canada, we weren't leaving without exploring the cuisine of our northern neighbors. The "Potato Wedges" were splendid and the BLT elicited comments the likes of, "The bread tastes like bread!" and "Hey, this is Canadian bacon, har, har." The coffee was good, the lemonade served in millilitres.

Hazel went adventuring with me to the Diez Vista 50k north of Vancouver in Port Moody. We drove up on a Friday is  the drizzle and awoke on Saturday to a heavy downpour. The race had an 8 O'Clock start and has been gifted to Gary Robbins and his race directing partner Geoff. First stop was hugs with Nikki Kimball who came up from the wilds of Montana to run. Then as the race started I got to catch up with Hal Koerner while we glided up to the first major hill, the Diez Vista Ridge. Then the bottom dropped out.

It started with being passed on the up hills. Climbing is my strong point and people were passing me going up hill. At first I was all, "See you...later, bro!" Then I was like, "Local knowledge." then we peaked and the gnarliest gnar gnar technical downhill I've experienced started. I was busy picking and choosing my little muddy foot placements and suddenly zoom! Some dude would fly past me at full sprint. I was dumbfounded. How can anyone run that fast on that gnar? Then it would happen again and again. I started the climb in fourth place, by the bottom, I was in 15th or 16th. I decided then and there I was old, washed up, broken, but I was going to enjoy the day, the scenery (which was ah-may-zing!) and I was going to spend an incredibly wet day traipsing about in a forrest in Canada. I gave IN but not UP. Then, the course flattened out a bit, went around a lake which was only slightly more wet than my outfit. I started catching people. Interesting. The race progressed, I got to see Hazel at aid station 3 and that made my heart lighten. 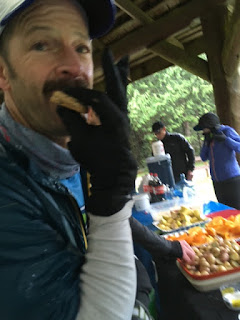 I headed out feeling positive and caught more runners. Interestinger. They kept coming back to me. I think they may have blown their energy stores on the first climb and descent.

I usually have songs stuck in my head during races. I've had Adele haunt me for 20 miles on Orcas Island. Elvis Costello stuck in my head for at least 85 miles of UTMB. Daft Punk poisoned my brain in Squamish. This race was oddly devoid of my mental playlist. I think I was so engaged with the technical terrain, then the out and backs where I could count the runners ahead of me, the songs were squeezed out. As I was repeating seven, seven, seven as I had moved up to seventh place, I came across the sixth place guy peeing by a tree and passed him, six, six, six and I came across Hal tucking his junk back in his shorts as I passed, five, five, five and sure enough, fifth place was soon trail side shaking hands with the unemployed. I was in fourth place and scared to death of stopping to pee. 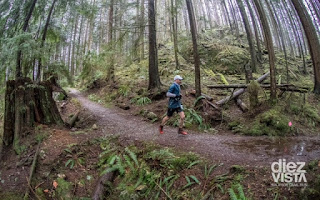 The last aid station arrived in a heavy downpour and they said 6.25 to the finish. I knew they meant kilometers because they had that metric look in their eyes. I still felt good. My huge right leg was powering along and my paltry left quad was tagging on like a lamprey. My excellent math skillz figured  about 4 miles, I can do that and I pushed hard. With about two miles to go, I saw someone on the trail ahead of me, it was the 3rd place runner and first place woman. She had been killing it all day and here she was stepping aside to let me pass. I was surprised, pleasantly surprised and I continued to push push push to the end. The finish materialized in the liquid distance and I flew/squashed through the mud to the finish and a huge hug from my very rained upon daughter. 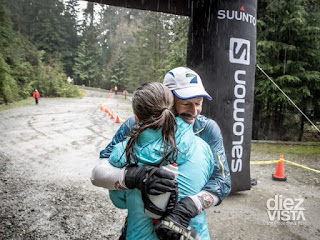 3rd place and a time of 5:02. I was thrilled. By giving In I relaxed, by not giving up I was able to bring it back and by being a tenacious old coot, I was able to continue to drive hard all the way to the finish. It was a blast.

Post notes: Getting the chance to involve my daughter in the full race experience was priceless. Getting to chat with Gary and Linda about their Barkley experience is what defines our community. Getting to flash a trophy at the boarder crossing guard when they ask, "What were you doing in Canada?". Fun, just fun. 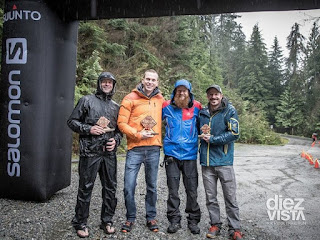 All the pictures in this blog post are by the very talented photographer Scott Robart who was working the Diez Vista race, except the one where I'm stuffing a cookie in my face, Hazel took that one.
Posted by adam hewey at 10:59 PM