Imagine, if you will, a life in which you truly embrace each opportunity. Try your best to not let any chance of excitement, adventure, intrigue go unexplored. What would you do? Imagine eyeing your next year with only growth, change and newness as your goals. I had this mind set going into the late part of 2016. This would be the year I would try to train throughout the dark, dank Seattle winter and finally run an early season 100. I was looking at the Hurt 100 in Hawaii in January when I got an invitation to run the Ultra Trail Tai Mo Shan 100 mile in Hong Kong over New Years. They would comp me for the race, some hotel nights and the flight. Boom. I had no choice. I am embracing the new, the adventure and I said, "I'd love to come explore Hong Kong".

I coerced my sister Meg, with very little effort, to accompany me across the world. 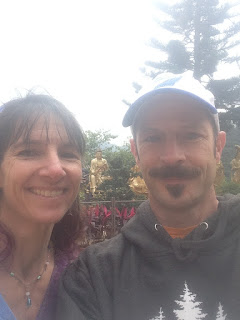 A few days after Christmas, there we were, trying to understand the Hong Kong MTR subway system to get from the airport to the Regal Riverside Hotel in Sha Tin, Kowloon. 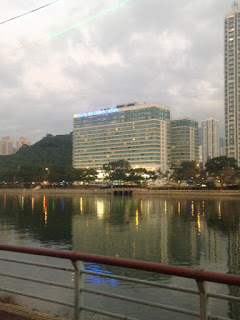 Six transfers later we were checked into the race hotel with a view of the pool and the river.
The next two days we explored and ate our way through the Kowloon side of Hong Kong. It was amazing. 7 million people stacked in high rise apartments with mountains, shopping, parks, funny signs, and really nice people everywhere. Years of English rule have made Hong Kong a country of bilingual, right hand drive, rule following, efficient, friendly folks. We touristed our way from Victoria harbor to Kowloon Park to 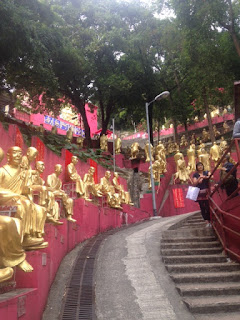 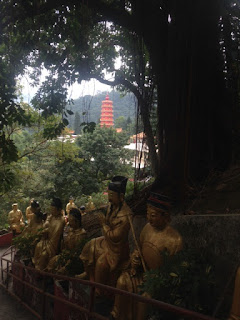 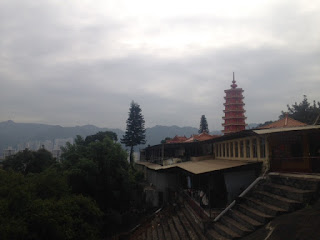 Then we went to the race briefing and it got real. I met Paul Wong the race director and Lucina Lo who was the organizer and the rest of the Invited Elite runners. I was honored to be amongst the people brought to Hong Kong to compete and the sole representative of the USA. Back across the river, to pretend to sleep until race morning.

The people of Hong Kong are lovely, really. Smiles abound, people are genuine and helpful. "Good Morning" is common and a sense of health and well being seems to be in the air along with a lot of smog drifting over from the mainland.

Race morning we were introduced to Andy, a volunteer who would be my sister's driver for the day taking her from aid station to aid station for however long it would take me to finish. He drove us to the start and played tour guide to my sister for 12 hours. 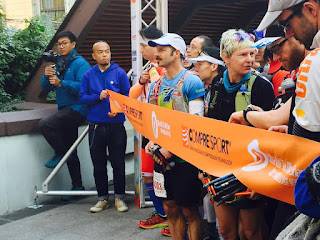 I spoke a bit on the stage prior to the race then toed the line and headed out into the unknown at 8:00 AM Hong Kong time which is about 4 PM Seattle time only the next day.

The morning dawned hot. What had been 60 degree days morphed into mid 70s. I was not prepared for the heat. I had been training in the darkness, wetness and chill of a mid 30 degree Seattle. The shock of my white, white legs traipsing around Hong Kong in shorts was one thing, the heat and humidity of running in this suddenly tropical domain was quite another. I started to slowly shrivel.

Things I wish I had been prepared for: A-The heat- I don't own a sauna but may have built one for this occasion. B- The terrain- I had no idea about 80% of the first 50 miles was paved steps. I was later to learn, the government of HK, in an effort to get people out exercising more, paved most trails so the populous could still hike during the monsoon season. No Mud! Great idea but really hard on the knees and quads and psyche of the unprepared runner. C- The air- burning eyes and a goopy throat is the result of Chinese industry and 7 million people in a small area. The Pacific Northwest's air is washed daily.

I dehydrated. Simple and true. I wilted like a daisy left in an empty vase. The pavement, the heat and the racing led me down a path of no return. I had my ups, I saw actual, live, monkeys. 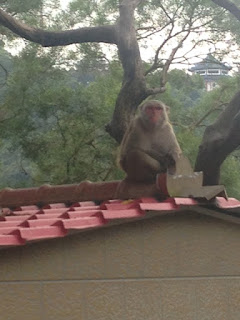 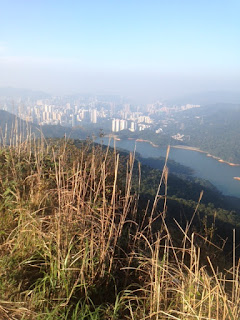 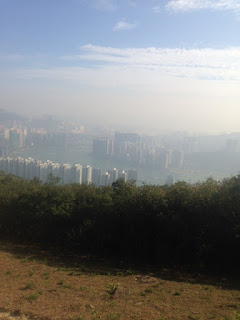 but eventually, I couldn't hold down food or water 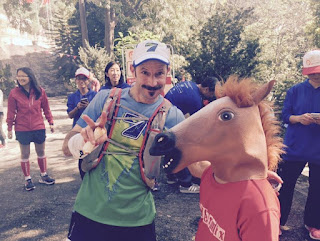 even the Horse Boy couldn't help me. 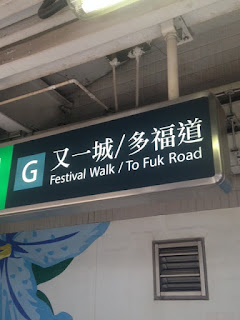 I found myself heading down the wrong path.
and I heard the DO DO DO. 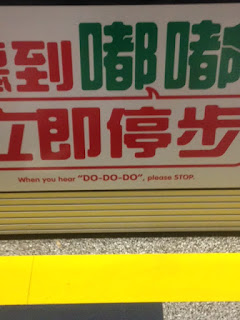 of defeat.
In actuality, I was getting very dizzy, threw up a lot and started to feel my kidneys hurt. I didn't think it wise to continue and risk ending up in a hospital so far from home. My body said stop. I did. I also happened to stop at the aid station where they had BBQ Goose and noodle soup! I couldn't eat it! I was really sad. I loaded up a zip lock baggie with goose, broth and noodles for later. Andy gave Meg and me a ride back to the hotel. Hours later, after a shower, I celebrated New Year 2017 with a cold baggie of goose noodle soup and fireworks on the TV in Cantonese.

The next day we wandered about Hong Kong Island and I felt excited to be adventuring but let down at my race failure. It is hard to deal with sore legs from 50 miles of stair running but feeling like you don't deserve to be sore. That evening we went to the race finish and watched people cross the line. I was able to chat with Desmond Wong who invited me to the race and had finished the full 100 miles. I was impressed. Later we ate real Hong Kong cuisine in a very sketchy restaurant. Why not?

Monday came and we hauled our carry on luggage across the city, through crazy cool street markets with all the sights, sound and smells we had come to experience, past the tall residential towers, the magnificent shopping districts, the bustling harbors, the orderly subways to the airport then off to Vancouver and eventually the very small looking skyline of Seattle.

I will always remember Ultra Trail Tai Mo Shan for the people. The volunteers were some of the most earnest, caring, enthusiastic people I have ever seen at a race. The race organization was spotless, the website and tracking were very good and the event was world class. I tip my very sweaty hat to the UTMT organization and Mr. Paul Wong Race Director. Thank you for inviting me and showing me your part of the world and your hospitality.

Thanks to Merrell for making shoes that could handle all terrains, to Petzl, Julbo, Drymax, to 7Hills Running Shop, to my family and everyone who watched the tracking and most of all thanks to my big sister Meg for sharing the adventure with me.