When the Race Director says to do something, you do it. When the race director is dressed in a full cow suit complete with udders, you don't question, you do. Chris, the RD for the Coyote Backbone 68 miler was very clear: Racing is bad form and you will be penalized with minutes added to your final time. Entertaining aid station volunteers, visiting interesting sites along the trail, bringing frivolity to the event will be met with minutes taken off your final time. I packed a pair of Glasses with nose and mustache in my running pack and hit the Backbone Trail at it's start in Santa Monica, California. It was Noon and hot. I was sweating like crazy before I had a chance to warm up. I watched as a few young guys took off fast up the trail, I hung for a while then fell in with Evan Hone and we chatted until I lost a piece of a pin from my pack, I stopped to search, he went on. That was the last I saw of the fast young contingent. 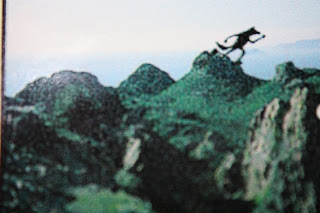 Site number one on the sites not to be missed list was Eagle Rock, a big formation with Hollywoodesque views of L.A. I hopped off the trail and scrambled up to find a great view and some volunteers from the next aid station who said I was the first person from the 12 O clock starters to visit. We took pictures, had some laughs and they said I'd earned a bunch of bonus minutes (negative minutes subtracted rather than Boner minutes which are added at the race end.) By climbing Eagle rock I had managed to pass the fast young guys in front of me. This is the game of Coyote runs. It is about fun. I fell in with a group of four guys who skipped Eagle rock and we came into the first aid station together greeted by Wendy Wheeler Jacobs in a full bunny suit. She was the shepherd for the noon start group. We ate, they ran off, I stayed and made jokes then looked around and found the hidden easter egg at the aid station which netted more minus minutes. Back on the trail I caught the group, passed them and went on to the next aid station. It was still really warm for my Northwest blood and I knew I was on the cusp of trouble with an overheated stomach. I tried my best to drink enough, keep up with the electrolytes and motor on. I rolled into an aid station at mile 23ish and started feeling lethargic and like not eating, I lingered (why not) and talked to some runners I'd met at dinner the night before. I ate a bit, reloaded my waters and hit the trail at the same time as a tall guy who was in good spirits. I used his enthusiasm to pull me up the trail and soon I felt better too. His name was Jay Smithburger from Ohio. I knew his name from Ultrasignup.com results. He was about my age and we soon were chatting away. The aid station at mile 32 had a Poquito Tiajuana theme and was sponsored by Patagonia and manned by my host for the weekend George Plomarity. It was great to see George and to get a quesodilla. The rest of the run turned from evening to night. Jay and I ran together both going through waves of feeling good and bad. It was like having a pacer, a trail buddy. We had an unspoken pact to stay together. Our pace seemed to fit each other and really, this wasn't a race even though we were moving at a good clip and never did get passed. By mile 52 my stomach overruled my decision to put chicken noodle soup in it. When I returned from yodeling to the bushes I decided to try a Ginger chew and a huge strawberry. They stayed down. From there it was a balancing act of night running, selective eating at aid stations and bad milage math. Eventually we squeezed through Buttcrack Rock, passed by Sandstone Peak and caught the scent of the Pacific Ocean. The last 2.5 miles of sweet single track we could see the finish line party in full swing about a quarter of a mile down the canyon only it takes 2.5 miles of switchbacks to get there. We did. Our time on the trail was around 13:35. It was 1:35 in the morning. Jay had to catch a 9 O'clock flight back to Ohio. We said our congratulations and goodbyes then I crawled into my rental car and slept for four hours before waking hungry knowing there were pancakes and Spam at the finish party.
Coyote Cohorts are everything right with trail running. Community over competition. Fun rules the day and a sense of mischief imbues the weekend. The cast of characters who ran the race or volunteered were a list of ultra running celebrities having a blast. These are the people I want to be around. I will definitely be back for more and more and more. Thanks George for inviting me in.
Later in the week I found out I finished 5th! 41 minutes ahead of Jay even though we hit the finish line at the same time.
Posted by adam hewey at 9:31 PM