I realized why it takes me at least a week to write a race report. I race really hard and it takes me a while to fully recover both physically and mentally. "The Stupids" is not only a great name for a punk band but the actual term for the mental vapidity which afflicts ultra runners post event. A combination of post event let down, physical exhaustion and sleep deprivation creates a bitter stew which, once tasted, makes one a slack jawed nincompoop. The longer the race, the longer the stupids lasts. Luckily for me and the readers of this blog, 50k stupids last less than a week.
The Lord Hill 50k was run on Sunday Feb. 24th, the day after Theo's 8th birthday party. If anything can make you ready to run an Ultra, it is attending a child's birthday party. Lord Hill has been around for 10 years but has not garnered a reputation as a destination race but rather a tune up for the season. Roger Michel and his Evergreen Trail Running put on an excellent, low key event which gathered around 65 runners for the 50k but a total of almost 400 runners for the combination 50k, 20m, 10m, 5m. The 50k and the 20 milers started at the same time. The course is a ten mile loop which starts out steep, gets steeper, then levels out and rolls until you go back down and repeat.
Disclaimer: I got into the race for free by winning an entry via a FleetFeet Seattle contest. I had two goals in mind. I wanted to win and set the course record. I hear these words on the screen and in my head and I seem like an egomaniac. Such pomp, such confidence, who do I think I am? It is very odd weighing persona, results and expectations with other realities like being a short, aged, city dweller. So there I was at the start line, in front. We ran off into the grey morning, up the damp single track and I hung with the lead pack of five or six. We hit the Lord of Hills and the lead guy, a young dude in a trucker hat with a mustache said, "that's gunna suck the third time." So I knew he was running the 50k. We got to the first aid station (out of 2) and to my delight they had Nutella and Jelly sandwiches! Score! I grabbed some and dashed out trailing the pack. I caught up with a nice guy named Jason who was doing the 20 mile and we chatted almost the whole way back to the start. Lap two I dropped off my vest as the day was staying a balmy 46ish. The course has a couple of out and back loops where you can see who's in front of you and by how much. Approaching aid station Nutella I saw trucker hat and he was about .8 of a mile in front of me. I decided to push this lap harder. I passed the rest of the 20 milers and the final 50ker. It was now just me and trucker hat dude. At the start of the race, RD Roger said anyone could drop down to the 20 mile if they weren't feeling it doing the 50K. I realized as I approached the start/finish I could drop down and win the 20 mile then do another loop to get in my miles for the weekend. No. I signed up to race 50k, 50k it would be. I ran off on loop 3. Loop courses are social as there are people all over the place. I got to see a lot of friends out there, some many times. I was red lining but feeling good. My hydration, nutrition and salt were spot on. I was heading for Nutella central and waiting to see how far behind I was and I waited and waited, finally, when I was almost at the aid station along came Trucker. I Nutellaed up and was on his heels. I caught him soon thereafter (mile 26 or so) and we chatted about running and whatnot. His name was Jordan and it was his first Ultra. He is in college and lives in Bend. He is half my age. He said he felt good but really needed to learn more about nutrition during races. We passed Glenn Tachiyama taking pictures and he captured the moment. Then we hit a hill and Jordan said, "see you later." as his legs wouldn't allow him to run up the slope. I still had Nutella pumping through my blood and sprinted up the incline and down the following miles. Now I had the win in hand, now for the C.R. I thought the Course Record was 4:18 held by Miles Ohlrich who was also running today. I came into the start/finish line at 4:04 with only a 1.1mile mini loop to complete. That 1.1 loop was a nightmare. Up, up with some more up before the final sprint down a dirt road to the finish. I broke the theoretical tape in 4:15:24. Roger congratulated me on my CR. I said, "Yeah, got it by 3 minutes!" He said, "Uh, no, actually the old record was 4:36." Jordan came in 11 minutes later in a time also under the CR. Mel Boss from Kelowna BC got third Overall and 1st woman. 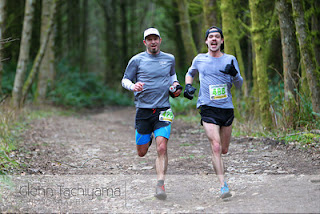 A great day racing. I also got the chance to hang out with a lot of runners who I'd never hung out with before. The community of Ultra runners is growing every year. The post race soup chats and note comparisons and jokes and smiles is what makes this a sport like no other.
Posted by adam hewey at 11:01 PM