What happened? Was a message scrawled across my facebook page. I have been trying to put an answer to the question ever since I dropped out of the group attempt to break Killian Jornet's speed record on the 165 mile Tahoe Rim Trail on August 13th. What happened... I failed, I flamed out, I dropped from the first event ever. I've been compiling a list of reasons which reads like a how to book on DNFs.
Chapter One: Ignoring illness leads to faster recovery.
Chapter two: Stress plus Heat plus Travel equals a body fit for the long haul.
Chapter three: Nutritional plans are optional.
Chapter four: Best results come from running someone else's pace.
Chapter five: Running in beautiful places should be hard work.
Chapter six: Your mind knows more than your body.
Chapter seven: You suck.
Chapter eight: People spend most of their time thinking about how much you suck.

The truth of the matter is I had a great time in Tahoe. The people I met, the support the project had, the pacers, the crew, Gary Gellin's amazing organization, the scenery, everything was beyond what I could have imagined. I had an amazing vacation with my beautiful wife Jane and kids. The problem was taking care of myself. In retrospect, I didn't give myself enough attention to succeed. My first problem was fairly unique in that I was bitten by a poisonous spider before or during the San Diego 100 in June. The bite turned into a systemic bacterial infection which I was able to ignore through a stint pacing the Seattle Rocknroll marathon and for another couple of weeks until I noticed a red line running up my vein from my infected big toe all the way to my swollen lymph node in my groin. The next day I was on antibiotics and two days later was back to 80 plus miles running to make up for lost time. Two weeks after that I ran the WhiteRiver 50 miler and felt good but was still unable to fill my deep energy stores. Two weeks after that I was in Tahoe after a sweltering 18 hour drive from Seattle.
In Roseburg, Oregon on my drive to Tahoe I stopped at a Panda Express for dinner. It was 90 plus degrees and I needed vegetables. I finished my meal, snapped open my fortune cookie and it read,"You are a leader, not a follower." I blinked five or six times and thought, "Shit, the cookie is right." I mistakenly ignored the cookie. Never ignore the cookie.
In Tahoe Gary had the entire event dialed in. We stayed at a great rental house, I met Ben Lewis and his wife Bethany and daughter. We had crew and pacers all over the place and a great communal vibe as everyone planned and plotted. I went for a shakeout run as I'd been driving for two days. I decided to go for about 45 minutes. Up from the house to the PCT and back. I went with a hand held bottle and my cell phone, ran for 20 minutes, turned around to go back and the next thing I know I'm trying to read my shoe patterns in the dust as I'm sure I'm not where I'm supposed to be. I got totally turned around. I call Gary and get spotty reception, it is getting to be twilight. I run up a mountain to get my bearings. I top the hill and expect to see a majestic lake but the valley in front of me is only pines. Crap! My East and West are inverted. I backtrack as the crew at the house mounts a rescue party. I come to a junction in the trail and choose the unknown path as I've tried the other two, it leads downhill and that is always good. It becomes a jeep path then a paved road and houses. I'm back in civilization. Ben and Bethany pick me up in the dark 2 hours into my shakeout run. I get back and eat dinner feeling like a tool.
Sunday I pick up the family in Reno and start to stress about the next morning's 5:30 start. Instead of my usual entire pizza before an Ultra, I get caught up in packing stuff and meetings and end up eating way too little of the community pasta and salad. The next morning I do the same at breakfast and hit the start way underfueled for 165 miles. 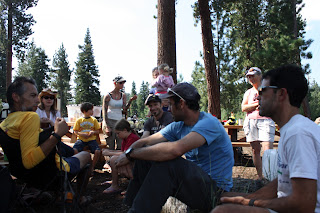 5:30 AM Monday August 13th I start the run with Gary Gellin, Victor Ballesteros, and Ben Lewis. Fresh and excited we head out into the darkness. The sun rises on the TRT and it is breathtakingly beautiful as we fly up the trail at a fast pace. The pace is predetermined by Gary's plan as the pace we need to keep to break Killian's record of 38 hours. It seems harder than I'd imagined. We motor on and the day starts to heat up. Aid stations are set up every 16 miles or so where we have crew and VictoryBags full of our needs. We get to the first crew spot and everyone is there, it's a smile fest with watermelon chomping kids and hugs all around. We head back out and the day heats up fast. The scenery gets better and better as the trail gets harder and hotter. Soon we are all running low on water and beginning to dehydrate and ration. We have two pacers with us for support and to help anyone who falls behind. No one does and we get to aid station 2 at mile 30 or so. By now the group is less talkative and I'm having a struggle. We all load up on maximum water which makes my pack extra heavy. I'm feeling slow and weak. I decide to eat something and the group passes by me. I struggle to eat and keep up with the group. The scenery is painfully pretty with high mountain lakes and granite vistas. A skinny dipper's heaven. We stop momentarily to find our way. I look at a post in the trail and it is warbeling which is a bad sign my mind is going. We head off and I know I'm not right. I keep on and lag to the back of the group with the Brian the second pacer. I walk, then start dry heaving into the bushes. I try to drink water and walk more, that too comes up. I'm hosed. I'm at mile 42 out of 165 and I'm stumbling like a drunk. The group disappears leaving me, Brian and my yodeling behind. I pull myself together a bit, walk, sulk, walk some more. I eventually try more water and a bit more sandwich but still can't muster much of a run. I'm done. I know in my heart I can't go another 123 miles in this condition. We stroll around Echo Lake and eventually arrive at the Echo Chalet parking lot and aid station. I see my wife and burst into tears. I see a chair and take it. Jane says I looked grey/green. I believe her. My kids keep a safe distance as I sit and try to keep both tears and water down. I eventually rebuff the best attempts of pacers and crew to get me to rally and end up curled in a ball on a curb trying to hide. I'm done. I've dropped.
Two hours post drop I was able to down coconut water. Four hours post bonk I was able to eat pizza at aid station four (mile 65) where Gary came in after the group splintered. Ben dropped there as he hadn't eaten in 3 hours and his achilles was limiting his run. Victor and Gary ran off into the night. Again, the people at the aid station were some of the nicest people I've met. Erik Schranz from Ultra Runner Podcast was decked out and ready to pace Ben through the night and rolled with it when he dropped, Holly, Jim and Steve were driving the crew van and handing out food and smiles. I packed up  the family and went back to the house for a long night's sleep in a soft bed.
Day two I awoke to find out Gary had pulled up hurt at mile 80 and had to hike 5 hours to get out. That left Victor as the sole survivor. We tracked him on line then went to breakfast and the beach. In the evening we all gathered at Tahoe Meadows (mile 124) and cheered Victor as he arrived with a flower in hand to give to his wife Jenna. Total class act. He donned his night gear and headed off for a second night in the wilderness. Day three we packed up to leave Tahoe and drove to the finish to wait for Victor. 53 hours after starting he appeared and crossed the finish crack to the cheers of his crew. Amazingly enough, he seemed little different than when he started, a lot dirtier, a bit sleepy but still mentally astute, joking, and in great spirits. The overwhelming feeling was of success in that one of the group made it in which validated all the effort of those involved and proved Gary's plan was the right approach. The record may not have been broken but the team effort to get Victor around the lake was incredibly satisfying. My own failures aside I felt part of something bigger, a community of people with a focused goal which morphed as it needed to produce something spectacular. 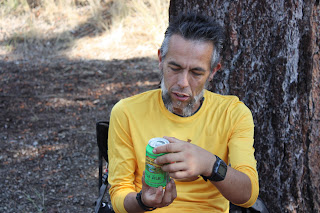 Post Tahoe, the family and I road tripped to the coast, up 101 to the Redwoods and Oregon coast and had a great time. I've had a tough go of trying to reconcile what went wrong for me. I've boiled it down to these lessons: 1- Run your own race. 2- Be self focused in preparation. 3- If you have a "drop" plan you will use it. 4- Be patient. 5-Victor Ballesteros is one awesome dude.
Huge thanks to Gary for inviting me along on this adventure and to everyone who helped make it happen. Yes, there are already rumblings about trying again next year.
Posted by adam hewey at 10:40 PM