This is a Mountain Willow 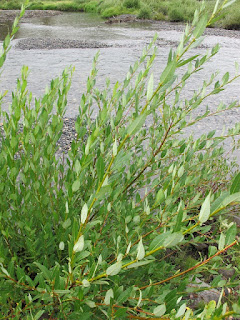 as you can see, it is not very thick nor would it protect one very well from, say, an intense HAIL STORM! One that lasted maybe, say, almost an HOUR! But I digress.
Mile Zero of the 2017 Wild and Tough Hardrock 100 Mile Endurance Run. I am at the starting rock with pretty much everything I'd need for an arctic expedition in my pack. Light wind coat, rain pants, arm sleeves, heavy rain coat, winter hat, chemical hand warmers, gloves, rubberized, Alaskan Crabber, Deadliest Catch style gloves and quite possibly some matches just in case.  There is no mandatory gear at Hardrock but I've seen some crazy shit on this course and I may have been kicked out of the Boy Scouts, but damn it, I will be prepared... and always alert... and stuff. 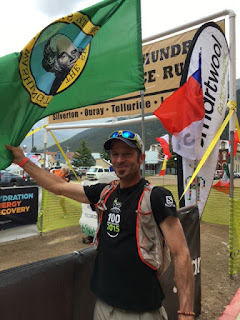 Mile 7ish, Gary Robbins, Sean Meissner and Matt Hart mock my huge pack as I crest the first climb of the day under a bright blue sky. I'm running smart and therefore somewhere in 40ish place despite the garage sale on my back. The miles start to accumulate. I fall in with my friends Kevin Davis and Darla Askew and we calmly click off the miles, Maggie's Gulch, Pole Creek, we pick up another runner, a guy named Chris and we head across the expanse of high alpine nothingness past Cataract Lake. Above timberline and in a wide hanging valley we are eclipsed by darkness as a storm rolls in fast. KABOOM! Rumble, rumble, my stomach is adjusting to the altitude. No! It is the Gods of Wrath hurling lightning at us as we pick up our pace looking for cover of which there is none. Crack, boom! Speedwork don't fail me now. Somewhere over the next ridge or the next is the descent into the Sherman basin and trees and rocks and hidey holes and such. Boom rumble rumble we are a little freaked out and run faster, we are totally exposed. Then the rain starts, big drops like loogies from a giant with post nasal drip. We are still in high gear as now we are getting wet with our wild eyed fear. Ouch! WTF! Ouch! the rain is turning to hail! Really big hail. Ouch, shit, run! We are already running! Run faster only with  your hands over your head, Ouch! The hail is nailing my knuckles and my ears and my Ouch! Holy shit, run, run, ouch. We turn a corner which drops us down a small slope and there is our salvation* See picture of skinny Mountain Willow above. We turn a corner and the four of us dive straight into the thicket of willows. Kevin pulls his pack over his head, I yank my heavy rain coat out of the pocket of my pack and make a tent over my head. The hail pummels us. I can't see Chris or Darla as they are behind me. It is loud and painful. We stay put curled up in the willows. The hail won't stop and starts to build up along my legs. The hail is filling the hedge, covering us. By the time it gets a couple of inches up my legs, maybe 30, 40 minutes, Kevin has had enough. He says, "I'm getting hypothermic, I gotta go!" And he does. Everyone else follow him. I stumble out of the hedge and take the time to properly zip up my heavy rain jacket over my pack and body. I look up in time to see a mama moose leading her baby across the meadow trying to find shelter. By now the trail which once was a path cut into the alpine tundra is now a six inch deep trough of ice pellets and water.
This section of bloggery is brought to you by Drymax Socks.
My feet were cold but not frozen. Perhaps it is the socks, perhaps it is the feet. Either way I felt lucky to have any feeling at all in my feet. My hands were a totally different story. Ten blue sticks wrapped around Black Diamond poles. I charged down toward Sherman falling in with a few other shocked storm refugees. We came to the first river crossing which had become a raging rapid as the river had doubled in size because of the storm. Running start and jump! The next few crossings had logs across them to walk across, only, they were now two feet under water. Eventually the hail abated, the trail became forest, the color started coming back into my fingers and I stumbled in the Sherman aid station in a state of disbelief and totally bonked out from lack of water and food and an overdose of stress. I ate warm things, I had some coffee. I found my gloves. All that winter gear and I had been only able to pull out my rain coat.
I left Sherman alone. My friends had gone. I wandered up the road watching rogue streams of chocolatey mud cascade down the hillsides, across the road and my Merrell All Out Peaks. My stomach decided it had enough of my shenanigans and rebelled. I sang the yodeling song of the ultra runner for a few miles then walked it in to the Burrow's Park Aid Station. They were really happy there and it was infectious. I ate a few pot stickers and headed out for the climb up Handie's Peak. It started to rain. I was climbing well and decided if I could stomach a few Fig Newtons I'd be fine. I did, I was. The climb went well. I passed a few people and topped the 14,000 footer in time for another storm to blacken the sky. I got off the peak in a hurry and descended to the Grouse Gulch aid station where my daughter Hazel and friend Annie were waiting. I got in, got a few hugs then broke down in tears. I tried my best to hold it together but the adventures of the day had accumulated to a bursting point and the flood gates opened. A brisket quesadilla brought me back to my senses and I pulled myself together and out of the aid station.
I don't wear a watch. I run by feel and as hard as I can within my means. I have a pretty good idea of how to pace things. I've seen four sunsets on Engineer Pass and knew I was later than I've ever been. 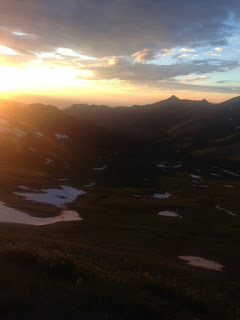 Take it as it is, I ran down Bear Creek in the dark to Ouray with not another soul near me.
Gary Robbins is a near and dear friend. We've know and adored each other well before he became "Barkley Guy" and I became "Stick Man". We've always wanted to pace each other in a race but in never matched up until this year. Gary was waiting, and I mean waiting, at Ouray. First thing he did was make me leave half my "gear" at the aid station. He promised if it got really cold, we'd cuddle for warmth and if you've seen his beard, I was comfortable with this option. We left without both my survival blankets and fire starter.
The second half of the race was a dream. I was hiking and running up and down the most beautiful mountains with the company of a great friend. We finally had time to really catch up and the miles disappeared. Kroger's Canteen was like an All Star Game of Ultra Running. Roch Horton, Jeff Browning and Diana Finkle were feeding us and, hey, is that Scott Jurek heating up some water? Howdy Scott. It was ridiculous and amazing. Back at it we ran the night away. Brushed my teeth in Telluride then headed up into the morning. Passed more people and believed Gary when he told me I was doing great. The race simply progressed. I swear I got a silly feeling on the final climb up Putnam Basin that I didn't want it to end. The magic of being one of the lucky runners to be able to pin a Hardrock bib on and run this majestic course, the unfettered joy of being on top of the San Juans chasing glittering markers, it really is my happy place. We were hauling ass in my happy place too. My slow start and pity party early on lead to having quads left for the late climbs. We topped the last top and headed down. Then we saw Adam Campbell slowly working his way down trail. Adam broke his back, hip and ankle in a climbing accident and brought himself all the way back to recover enough in a year to tackle the Hardest 100 miler in the USA. Adam is a hero and a fighter and an inspiration. We exchanged hugs and a few tears then hit the final aid station for Ginger ale. The rest of the run was a happy blur. We pounded the final descent to Mineral Creek and crossed the river. We ran the victory miles back to Silverton and as we came close to the high school I saw my daughter waiting for my arrival. I live for moments like this. Gary said something that stuck with me. He said, "You are on a different plane right now, pushing hard at the end of a 100 miler. You can't cheat that. That is only earned. You are one of the few people on Earth that gets to feel this." Then I kissed that beautiful rock and my daughter and hugged RD Dale Garland and probably everyone else within a two block radius.
My time was 31:50, 24th place. An hour slower than my last time. *See picture of Willow above.
Two weeks later I have four Hardrock finishes and five toenails.
Posted by adam hewey at 7:51 AM