I want to find out who is responsible for designing the new Montrail Fluid flex shoe because they are getting a valentine's card from me next February 14th. Brian Morrison at Fleet Feet Seattle gave me a pair of these beauties to try out and review. I take a shoe review seriously. I believe a good shoe can change over time and what was once a sweet ride can become an injury machine if it breaks down too fast. I decided to beat the Fluid Flex into the ground and find out what they were made of.
I had been using the Montrail Rogue Fly as my training and race shoe for trails this last year. The Fly is a great shoe only it is so minimal my feet were taking a pounding. What I loved about the Fly was exactly what they transferred to the Fluid Flex. This shoe is light, 7oz for Men's 8.5 with a slipper like upper which hugs the mid foot and yet leaves enough room in the toe box for piggy spreading. What the Flex has which the Fly lacked is a layer of cushy cushy Evo foam to absorb the abuse one doles out on rough trails or hard cement. 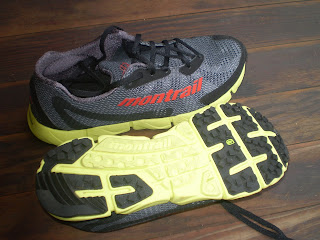 The added cush combined with a lug pattern built to be a hybrid for trail and road, as there are lugs only on the forefoot and heel, keep the weight in check. The shoe has a 4mm drop and a flat bed which leaves the running to the runner not the shoe designer. My only gripe so far is the offset tongue which follows the curve of the foot makes for some openings in the upper along the tongue allowing debris to get in. The Ultimate test: Yakima 50k
The Yakima 50k has some seriously gnarly trail sections. From crumbly rock to baked jeep road to sandy switchbacks this race is a killer on the feet. With the same average elevation gain and loss as Hardrock per mile (almost 10,000 ft for 50k) if you can get past your burning quads to even feel your feet at the finish you probably didn't run hard enough. Add in beautiful views of sweeping sage covered valleys backed by snowy mountains, a bodacious hit of sunshine and the perks of a James Varner Rainshadow Running event (Beer and bluegrass at the finish), and you've got a picture perfect race day.
I van de camped at the start and awoke to find blue skies and friendly faces. I got my bib and it was number 1. I was a marked man. I was also really proud to pin numero uno on as it was validation of my past two wins at this race. I was hoping to land top three as this year the field was fast with speedsters coming in from Montana, Oregon, Utah and the Great White North.
We hit the trail and I climbed, descended, climbed, repeat. Up, down almost never flat except one long sagey valley midway between aid stations 1&2 and 4&5. The course is an out and back. My plan was to run the first half and race the second. I rolled into the half way aid station #3 in 6th place feeling great in 2:38. I relied on only PBJ, water and S-caps. My feet felt great. I found by sipping water more often and never gulping, my stomach did not get overloaded or queazy. There was a nice breeze this year which kept the temp down and made for faster running. I started racing and slowly picked off the first two guys in front of me. By the time I got to the last (never ending) climb I passed the kid who was in third place and tried to put some distance between us but he stuck with me for a long time. I was finally able to pull away on the 9th false summit of the climb. By kid, I mean he is 17 years old and a hell of a runner. 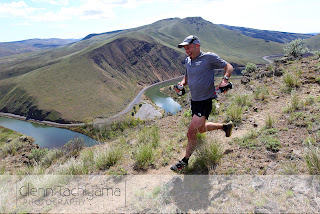 The final plunge down the mountain is so steep and perilous it should be named either the Toebang Express or maybe The Bungee Jump. I plummeted down and almost wiped out 6.5 times. Yes I kept count. I sprinted back across the Yakima river's rickety bridge and on to the finish in 5:15:14 taking four minutes off my Course Record time of last year, running a negative split and good enough for 3rd place this year. Maxwell Ferguson destroyed the CR in 4:55 and Matt Hart captured second in 5:00:30. Smiles, handshakes, beer, pizza, cramping, laughing, watermelon, and a long drive home capped a great weekend.
You never really know what damage you've done until you take a shower. As I washed off my toes I still had all my toenails! The combination of the Montrail Fluid Flex and Drymax socks kept my feet in great shape for such a brutal course. I had a nice round blister on my heel from the rock I refused to stop and eject but that is a combination of my dumb tenacity and the gap in the shoe tongue.
In all I have run the Montrail Fluid Flex on roads, on soft PNW singletrack and on cruddy desert trails at race pace. My conclusion: Amazing shoe! Right now I feel I may have found my shoe for Hardrock 100. I might have to wear gators though and I think I ripped out some of the stitching while kicking rocks or rubbing up against sage brush. Still, someone at Montrail is getting a Valentine.