Bib number 3, Adam Hewey VM1 USA. Crisp, thick and pristine. An American flag proudly waving above the printed elevation profile for the 100 Miles of Istria ready to be folded and pinned to my shorts. 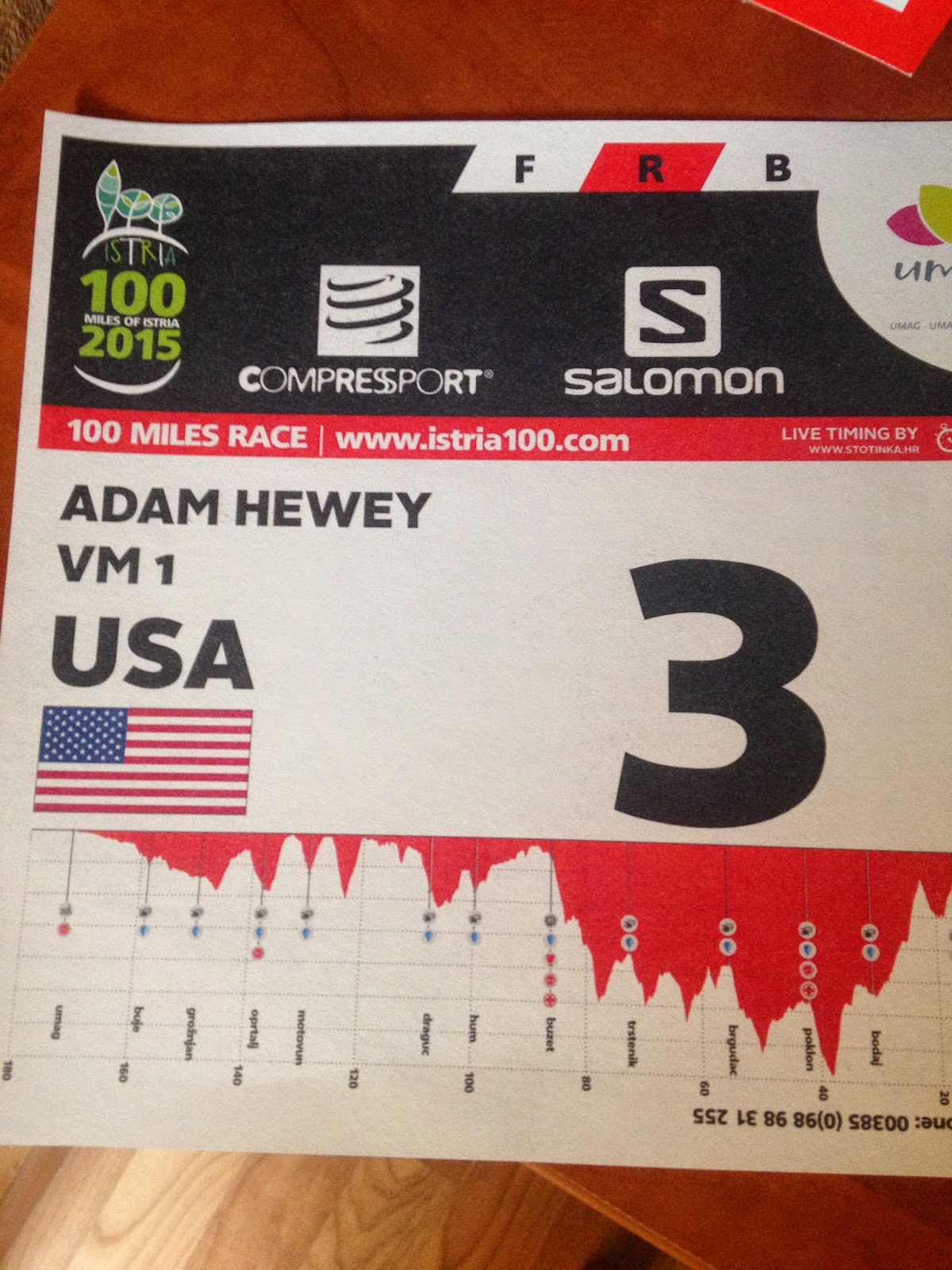 I had done an awful lot of sleeping and eating. I arrived in Umag, Croatia with Roch Horton and his wife Catherine via a van ride from Venice via a plane ride from NYC via Seattle. My Tuesday had become a truncated Wednesday and that led to an awful lot of sleeping. The Hotel Sol Umag had an amazing buffet which became the brackets between napping and sleeping. The hotel is perched on the shores of the Adriatic Sea, along the Dalmatian Coast on the Istrian Peninsula. In other words, it was beautiful. It was also pre tourist season which meant everything was being painted or built or was not yet open. This place must rock during the summer.

Croatia is a long way from Seattle. In many ways.

Every thing in Croatia seemed, rather, thick. The pastries were thick, the toilet paper was thick, the gelato, the air, the seagulls. Built to withstand thousands of years of war and change and uncertainty. Bib #3 was thick. Safety pins bent troughs into my thumbs trying to push them through the fabric.

The race started at 7:00PM. We were loaded onto busses in Umag and trucked 100 miles across the peninsula to the city of Labin on the Eastern side of Istria. It was lovely, medieval and drizzly. I wore my 7 Hills Running Shop hoodie and a wide mustache. There were small snacks. There were throngs of runners waiting. There was a pre race interview with a camera crew. 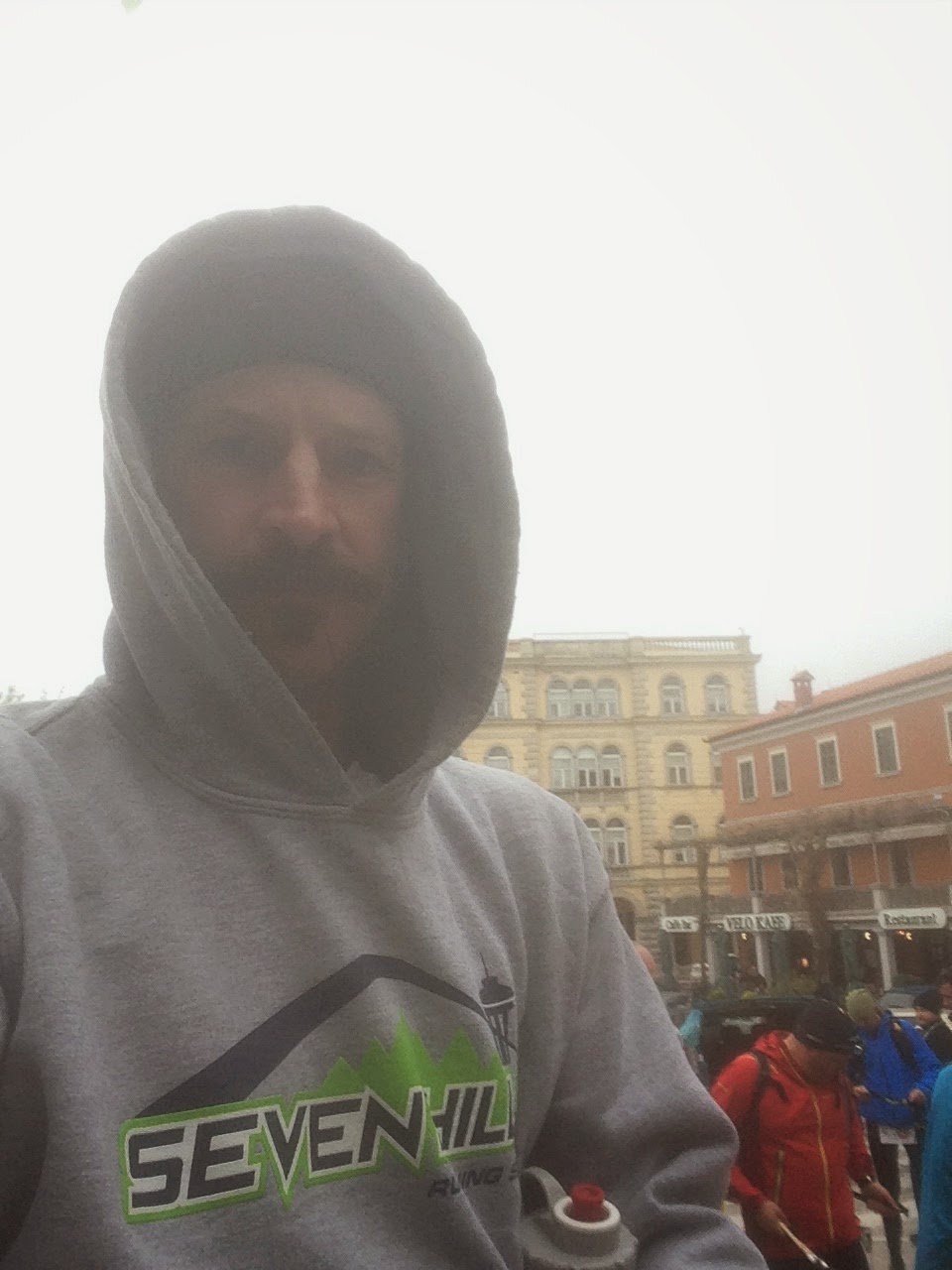 What the hell was I doing in Labin, Croatia? Reality check. I was a long way away from Seattle, from my home and family, a long way from the USA, heck, I was a long way from Umag. 107 miles away to be exact. I was one of five Americans running and the only person wearing a hoodie at the start. Reality is but an illusion so I stripped down to my race kit and toed the line under the inflatable salomon arch next to Jay Aldous, last year's winner. Aaaand we were off. Waaaay too fast. Within the first two miles I was stripping off my Patagonia houdini jacket and hat as I started to get really hot. The beauty of the course was coming at me fast and furious. We went from single track to port side road to dirt road to trail. The air was fragrant with sea and wild herbs. The foliage was begging me to stop and explore, forage for wild asparagus like the old ladies in the hills were. I kept going, thrilled but hot. The light grew dim as the dusk crept in.

I was alone on a long dirt road. It was just before dark. I was running slightly downhill at a good clip. I spooked something on the hill below me. I heard it jolt and sticks snap. I picked the pace up a bit. I heard it follow me, more sticks snapping, more bushes being brushed. It kept pace with me. I ran faster. It did too. I was on dirt road, it was in forest. What could it be? I turned on the speed and blazed out of  fear, looking back every now and then. Nothing. Then it was gone.

The night surrounded us, then the fog swallowed us whole. Pea soup fog. Maybe ten feet of visibility. The footing was treacherous. Limestone ridges, slick with dew. Crumbling descents, nothing seemed solid. The course was really well marked with little flags with reflective tape on the stick. Still I was working very hard mentally and physically. It started to take its toll.

Rabac, Kosi, Plomin, Katun, Bodaj, I'm not making these up! Vojak, Polkon, Planik, Brgudac, Oruak, Bomila, Trstenik, Zbevnica and finally the drop bag stop at Buzet. Somewhere along the path of those control points and aid stations, I lost my shit. First my hip started flaring, then 10 hours in, my stomach blew up. By the time I dragged my sorry ass in the door at Buzet I had decided I was no longer racing. I was going to keep going until I could see the cool towns of Hum and Motovan. Then I could quit or die. I had also decided to give up my spot at Hardrock and the sport of running forever. 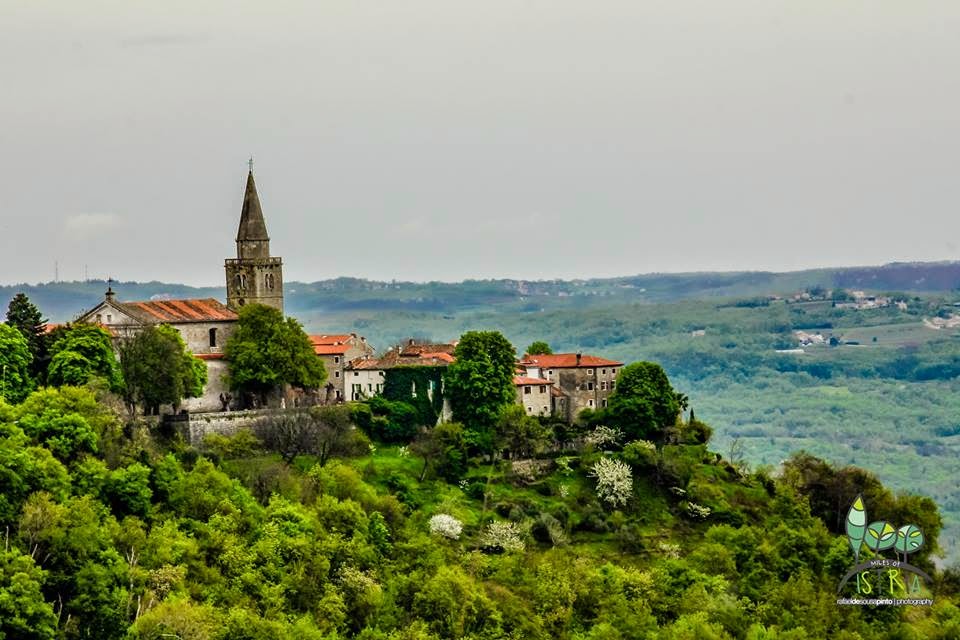 In Buzet I changed hats and had a bowl of soup. Soup lets you know. It either stays down or it shoots out your nose. This soup stayed in and I went out. I did a fair bit of walking but as the course went downhill it got me running again. It was nice to be in daylight. The night had been rough. The fog and rain had turned to snow at one point. Now it was a steady drizzle. The valley floor was thick with mud.  Slowly we worked our way up to Hum, the smallest city in the world (population 17). It was gorgeous. I took out my phone and snapped pictures. The aid station was in an ancient castle or church. I left there feeling pretty perky. My stomach was getting better and I was taking in electrolytes through eating packets of Fuel 100 Electrobytes which helped fend off the cramping from lack of food. Then the rains came in... 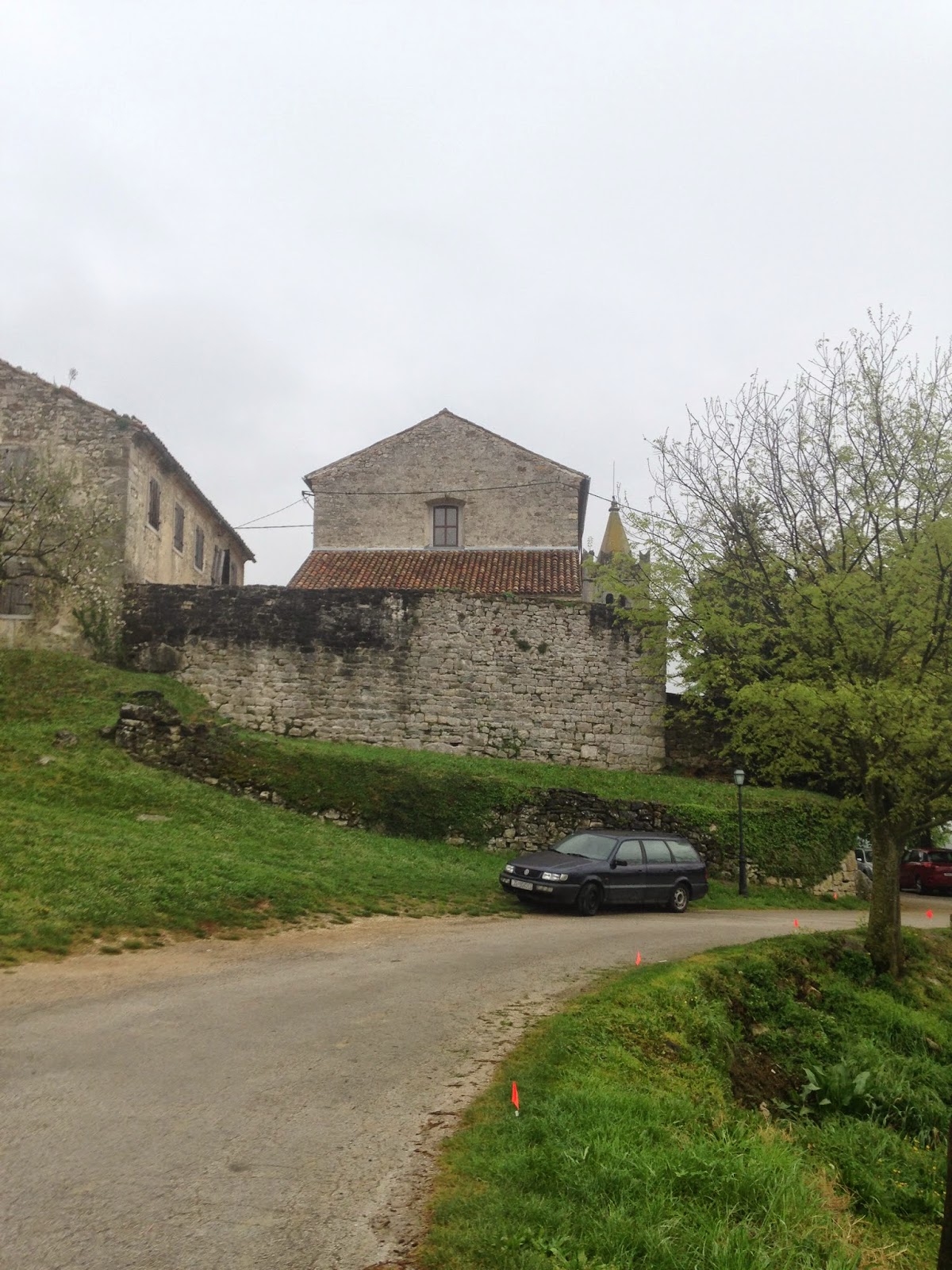 Of the 187 people who actually started the race, 94 finished, 93 dropped out, this is why. The rain started hard and got miserable fast. I put on my houdini jacket which got soaked through, then the wind picked up and drove the rain harder. When I got to the aid station in Draguc, which looked like a gladiator waiting room, I was shaking and freezing. I put on my rubberized raincoat and my bright blue rubber Alaska Fishing Supply gloves. I said goodbye to the guys huddled under blankets waiting for the drop van and headed back out into the storm. 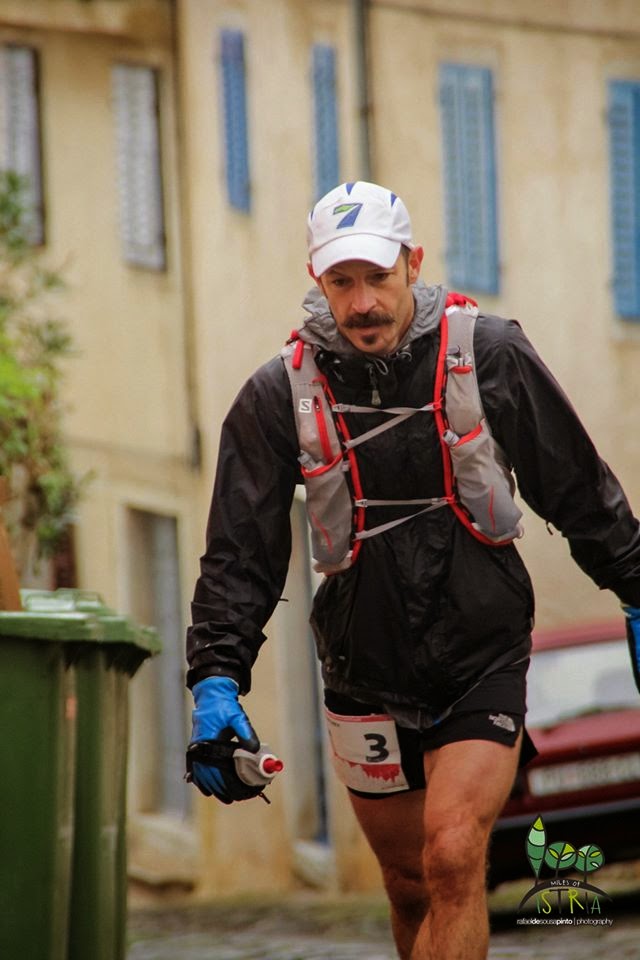 Hills, mud, roads, repeat. There were some great bushwack sections up parts but then, inevitably it ended up back in the mud along tractor paths. Up to Motovun, the medieval city of arts and the 12th of 14 climbs. Wet cobbles wending up ancient walls. I got to the aid station and met a nice bunch of runners and volunteers. Spirits lifted I was on down the road. 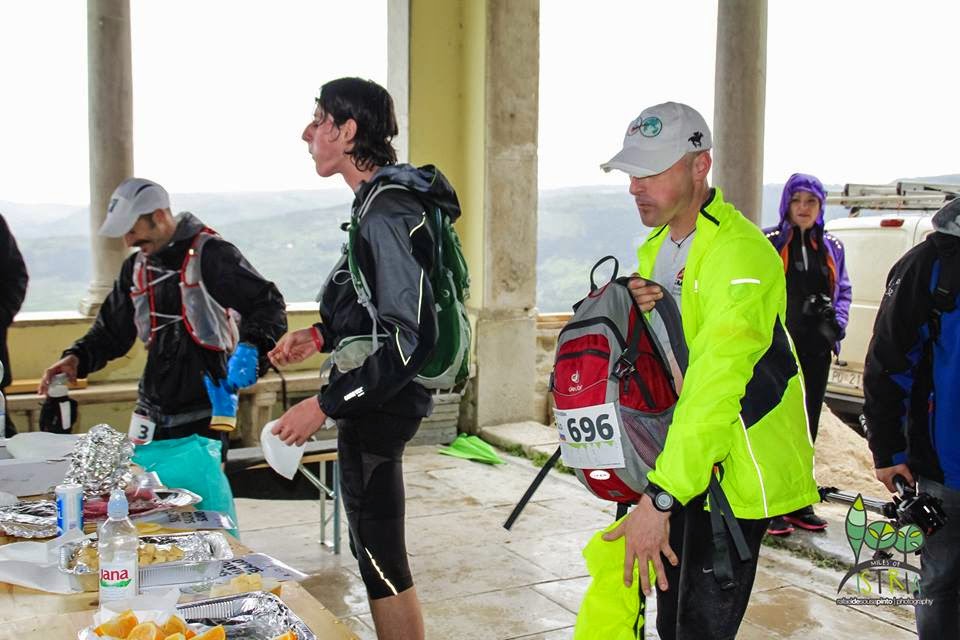 There were three races going on at the same time. The 107 mile, a 110k and a 65k. By this point all the different courses had converged and there was no way of knowing who was running what until you could see their bib color. It didn't really matter anyway. The race had become more about finishing than racing. The next aid stations were crowded with cold runners reevaluating their choice of hobbies.

In the forests of Istria there are Cuckoo birds. They sound like Cuckoo clocks. I'd never heard one before. It was funny.

The day grew long, the weather cleared to a dull grey, the mud stacked thick on the soles of my Merrill All Out Peaks. I loved this shoe for the race. I weep for what I put those poor shoes through. I hit the last aid station at Buje, took in two bites of apple strudel, reloaded water in my handheld and, smelling the barn, ran hard for the six or eight miles to the finish only, I was wrong. From Buje you can see the coast, the end of the run. From Buje you can take a road straight to Umag. If you are a psychopathic race director, you send your runners North, then East, then North, then around in a circle. Finally I saw a sign for Umag. Welcome to Old Umag! 12k to New Umag. Wha? The flags led up to the town and into a building? There was an aid station. I was pissed. I ran right through it. 12K more? My hope of finishing in the sunset were dimming. Damn! My new goal was to finish without my flashlight. I ran mad through the muddy fields and mucky trails finally coming to the road to Umag where a volunteer said "Only 5k to finish!" 5 freakin' k?!! What cha gunna do? Keep running, running mad, running muddy. I could see the town, the road to the finish, I now knew where I was, only a few blocks more to the waterfront then down the promenade to the finish chute. It was almost dark. I beat the night but just barely. 25:25:50 8:25PM, good enough for 10th place, 9th place man.

I went directly to the hotel, stripped off my everything on the balcony, crawled into clean clothes and destroyed the all you can eat buffet in the restaurant. Zombie walked to our room, showered and slept the sleep of the dead only the dead don't snore so loud the people in the room next door can be heard dragging their bed away from the wall at 2:AM. I woke up 10 hours later when Roch came in covered in mud and stories. 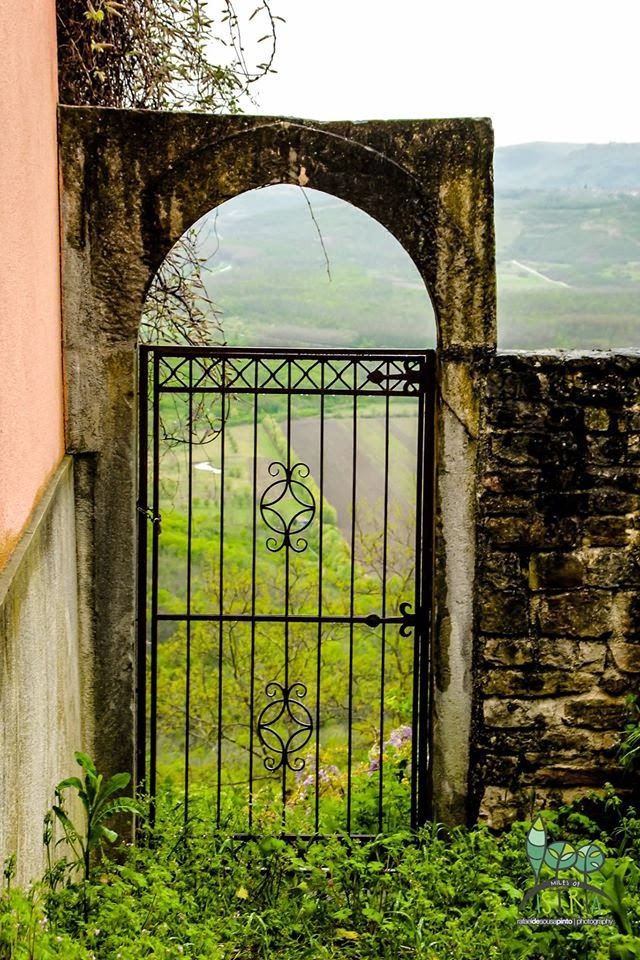 My goal was to have an adventure in faraway lands. It was met. I left Croatia feeling like I had more in common with the people I saw and met than differences. I feel like a citizen of the world. People are people. They walk their dogs, they sell "No Bullshitting" t-shirts, they work, play, mow their yard and some of them are crazy enough to try to run 107 miles across Istria. These are my people and they are on every continent. Hvala Umag, Hvala 100 Miles of Istria. Hvala Race director Alen Paliska. I hope to see you all again.

Photo credits are from the 100 Miles of Istria Race Photos and the others are mine.
Posted by adam hewey at 10:53 PM