Well that was interesting. As I recover in Denver, shedding a toenail or two daily, I finally have time to reflect on what I've gotten myself into. The Mondo Slam got off to a slightly disappointing start.
I had high aspirations coming into Western States 100. Of the last three races I'd run all were faster than any year before. I felt like I was as trained as could be for my A race and was hoping for a finish time between 16:30 and 17:30. I was hydrated, rested, ready and well supported by family and my amazing crew of Phil from 7 Hills, Jonathon Bernard and Glenn Tachiyama. Everything was lined up for a great race.
We hit Squaw on Thursday, the altitude is always an annoying factor as I think it shouldn't bother me but it does. The atmosphere was really fun. I like the hype, the history and the pageantry of the oldest 100 miler. It was really fun to hob knob with the elites and meet new people. I finally met Nikki Kimball who is a family friend to my siblings in Montana. Talk about inspiring.
Race day dawned early and cool. Got to the start around 4 AM, checked in, drank coffee and waited. Gordy said a few words then the gun rang out across the valley and we were off up the Escarpment. Beautiful. So beautiful I was fighting the urge to stop and watch the sun rise over Lake Tahoe. I kept going and fell in with the top women, meeting and chatting with Larissa who took second and Kaci who ended up sixth. A lot of back and forth later, I was matched up with Jason Leaman and Pam Smith (last year's champion). I saw crew at mile 20 something. The day heated up. My plan was to not allow myself to overheat. Wasatch last fall taught me a valuable lesson. I wore a visor, a waist pack, a bandana full of ice on my head and stayed wet by dipping in every stream, puddle and aid station.
My race progressed nicely. I was in the top 40 where I wanted to be. My plan was to be efficient until mile 70 then race the last 30 and pick off the carnage.
Memo to myself: Pack a lot of Avocados in my drop bags 'cause that shit rocks!
The day got hot. Average heat for W.S. but hot for a PNW runner. Still I didn't lose my composure or my stomach even though I was on the line a few times. I picked up Jonathan as a pacer at Forrest Hill and the company was great. We picked up the pace and were really clipping along but there was nobody to pass.
My Achilles heel is digestion. I stop at an aid station, get food, eat it while walking and then have to walk until it goes down, which is the preferable direction. This slows me down. Something Jason Leaman and AJW may have noticed as they passed me walking out of aid stations. Thankfully, AJW would stop to puke and we would pass him until the next aid station. Rinse, puke, repeat.
Jane, my amazing wife posted a Facebook picture of our daughter sitting barefoot on a fence on an island with her friends. She said, "Do you have your bliss on?" This became my mantra for the race. When I would start to suffer I would ask myself if I had my bliss on. I did. I was running around in the mountains of California having a blast with friends. We finally made it to the river crossing, the iconic, seen it in pictures, river crossing. It was so freaking cool. My favorite part of the course for sure. I wanted to do it twice but Phil was waiting to take over pacing duties on the far side.
By now I knew my race time was way behind where I wanted it to be. So it goes. I was still running good and within my self. I was pushing it but not dangerously. The hills on the last 20 miles are nasty. My feet were falling apart, my legs were getting stringy. The time between aid stations got longer and longer. Phil's enthusiasm was uplifting. By the time we made it to No Hands Bridge I decided it was time to leave it all on the course. We ran the uphills until they turned to steps. We pushed hard and looked for the lights of Auburn. We got to the road leading to the stadium and I again was taken by how many great ultra runners had run this very road. Jonathon joined us and we three ran to the stadium. Surreal. I finished in 19:28 for 32nd place. I couldn't have run any faster.
Post race they ask for a blood sample to study. I gave. When my results came back it said I had elevated BUN and Creotin and something else which indicates kidney danger. Pretty much it said if I wasn't peeing regularly a trip to the ER was due. I was peeing great so it wasn't an issue. The results told me I was running within my limits. I pushed it but not to the danger level. I think if I was 10 years younger I would have been in the ER. Instead I ended up in the Super 8 in Auburn with a pizza and an IPA (Thanks JB).
I will always cherish my Western States experience. I probably will never run it again as it is a course which really doesn't fit my strengths. I will definitely come back to pace someone. Phil?
From California, to Seattle for 2 days, to Denver to rest and recover and on to Silverton for Mondo Slam part 2. I've lost most of my toenails and my legs are still really sore but, hey, I've still got another 6 days until Hardrock starts. 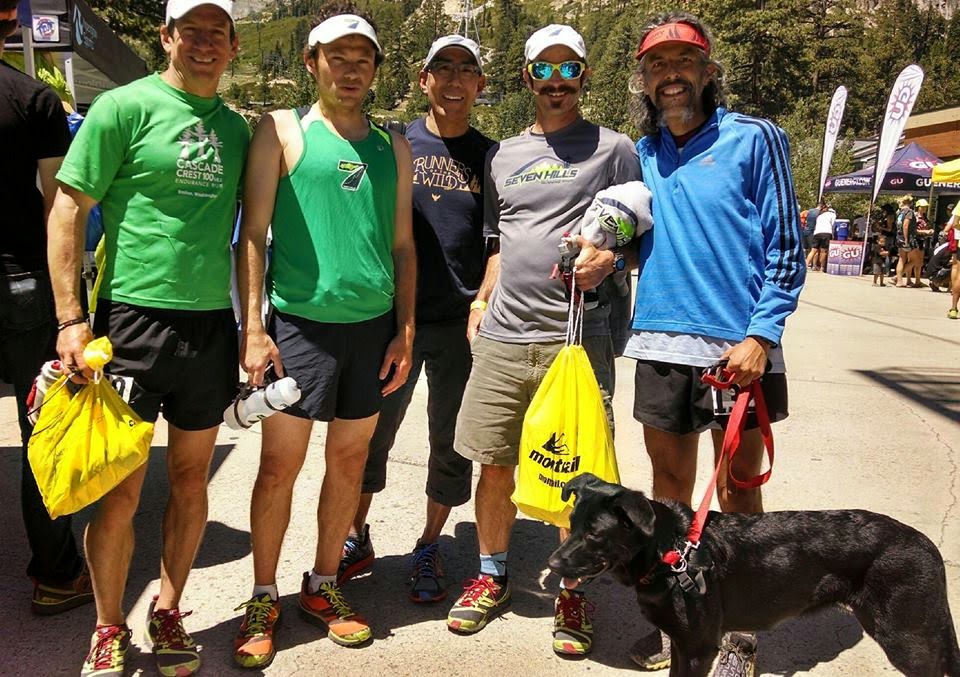