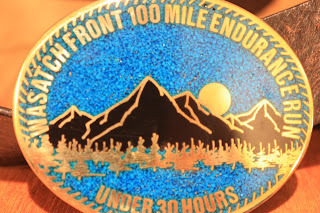 I can't thank Ben, Bethany and their daughter Ada Lewis enough. They gave up an entire weekend to drag my butt around the Wasatch range. I also need to thank my wife Jane for being so supportive and understanding of my odd hobby. Seven Hills Running Shop supports me in these endeavors and Phil supplied me with the Hoka Stinson Trail shoe that took me from mile one to one hundred. I have never had happier ankles than I had after wearing the Hokas over some brutal terrain. I also have to praise my Julbo Sunglasses which kept my eyes from burning up in the Utah scorch.
The worst thing about running such a tough Wasatch 100 this year is that I know I'll be back to try to get under 24 hours. I do not look forward to that day.
Posted by adam hewey at 11:01 PM