Friday night, after a frantic day of kid shuffling and work I found myself in a van down by the river. The Yakima river that is, trying to figure out what to wear for the morning's 50k. I was sleeping 3,000 feet below the morning's first climb.
The Yakima Skyline Rim 50k was the first Ultra I had won. 2011 was the first year James Varner and his Rainshadow Running put on the event, so by winning I had set the Course Record at 5:29:34. I really wanted to see if that record would hold or if it was a soft time on a hard course. The allure of returning as champion outweighed my better judgement as I should have been tapering for Miwok 100k in San Francisco two weeks later. Instead I was lacing up the Montrail Rogue Flys to defend my title and waste my quads on the nearly 11,000ft of climbing and descent this bruiser of a course had to offer. The day dawned bright and clear. The jacket and gloves never stood a chance. I went with light sleeves, two handhelds and a fannypack of peanut butter crackers. Teammates Allen and Sara were lined up and ready, Joe who got 3rd last year was there as was Matt Hart up from SLC and a bunch of Ultra characters known and unknown. 3,2,1 Get out of here and we looped the lot, crossed the jumping bridge and headed for the first monster climb. I felt good, the day was beautiful and two guys took off hard on the first climb. I was happy to see them try to win it on the first of four major climbs. I hung on in 3-4th, we topped the ridge and I fell in with some super nice guys from Walla Walla and Missoula. The second big climb is where the sun finally set it's teeth. It bit hard as I climbed and by the top and the 10 mile aid station I was feeling pukish and had to walk a bit to settle. I settled on the fact I don't do well with Nuun. I decided to stick with water from there on. I was in 3rd and the guys in front were putting it down, then Oliver the kid from Walla Walla flew past me on the rockiest of downhills and I just watched him go. I felt like I was not taking the bait to chase... yet. the turn around found me 8-10 minutes behind the leader. I loaded up on water and hit climb #3. Now I felt good. I passed Oliver and spent the rest of the climb saying "nice job" and "thanks" to all the runners coming down the trail. I peaked and hit the downhill trying to keep pace with the boys ahead. I came to the only flatish part of the run where it wends it's way through a valley of sagebrush and to my surprise I saw the guys in front of me, then I caught the guys. We hit the last huge climb (3000ft) and they stepped aside for me. I took two steps up the steep and both legs cramped. I couldn't let them see me cramping so I faked it up the steep slope until the cramps subsided, then I pushed really hard to put some distance on them. I figured if I could get 1/2 to 1 mile ahead of them by the peak, they wouldn't catch me on the downhill. I put my head down and just climbed. I was hot, it was dry, it was steep. I climbed more until I saw the final aid station and Brandon Sybrowski there filling my water bottle, 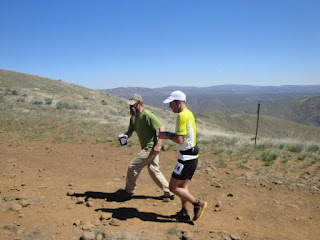 the dude is a legend and he was asking my name- kind of like having Shane MacGowan buy you a pint. Up the final false summits and finally the turn to drop like an elevator to the valley floor. I bombed as fast as my liquified quads would let me, nearly tripped down the cliff just like last year, thought a stick was a rattlesnake and yelped, almost passed out after tying a shoe and finally saw the bridge, the river, the finishline. I crossed in 1st place with a new CR of 5:19:03! Thankfully Gwen Scott was there to walk me around until I could sit, James gave me a new coffee mug for winning. The next guy came in 19 minutes later at 5:38.
My conclusions: I love this race, sunburn trumps foam roller, I will recover by Miwok and yes, last years CR must have been soft.
Posted by adam hewey at 10:57 PM